The Hawaiki Submarine Cable landed at Mangawhai Heads on 13 February 2018.  Please note that the beach around the landing site will remain closed for another 1-2 days while work continues.

A pedestrian diversion is in place, which will take you briefly off the beach around the work area and back onto the beach.

About the cable landing

·         The landing is dependent on operational, weather and marine conditions.

·         The cable ship will reach Mangawhai Heads and (typically starting at first light) the cable will be brought to the landing site over several hours.

·         The area around where the cable is laid on the beach and a several hundred metre wide corridor between the shoreline and cable ship about 1km offshore will be closed to public               access for 3-5 days for health and safety reasons.

·         During this time, small boats and divers will be working between the shoreline and cable ship, and local boaties and marine users will need to temporarily detour around the area.

·         Any beach users or people walking on the Bream Head Trail, will need to take a small detour around the area of work. 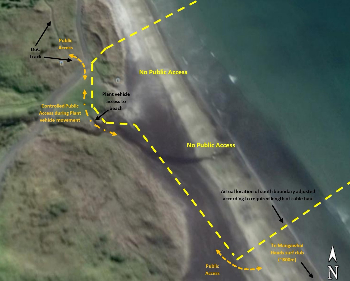 New Zealand's internet capacity is one step closer to more than doubling with the landing of the Hawaiki Submarine Cable at Mangawhai Heads later this month.

Two cable ships are currently installing fibre-optic cable on the $500m, 15,000km submarine cable system; one in each hemisphere.

Starting in Sydney last November, the ‘CS Responder’ has nearly completed the Australian segment of the system. It is now about to sail to NZ with Mangawhai its first official stop on its journey northwards towards the USA.

The cable is landing at Mangawhai Heads beach by Bream Tail Farm, about 800m north of the Surf Club.

The current scheduled date for the cable landing is January 29th.

“We are very pleased and excited to finally be reaching this major project milestone,” said Hawaiki’s NZ Programme Manager, Richard Howarth. “However there can be schedule changes arising from operational matters and weather, so the landing date may change. We will keep the public notified via the Mangawhai Focus website. Also, the ship may be seen offshore prior to the landing date while it completes other work before the actual landing.”

The cable ship will bring the cable – which with full protective armour is approximately the diameter of a $2 coin – to about 800m from the beach. Once there, it will be floated ashore using large buoys attached to the cable as it departs the vessel. 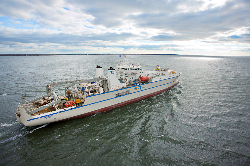 An area of the beach and offshore between the beach and cable ship will be closed to the public while the cable installation work is done, which is expected to take approximately three days. However, access to the northern end of the beach and the Department of Conservation headland walking track will be maintained.

Once on land, the cable will travel underground from under the sand dunes to the Cable Landing Station currently under construction on Cove Road.

The underground ducting was installed last year using Horizontal Directional Drilling (HDD) technology, which allowed the pipes to be installed with minimal disturbance to the ground surface and ensuring the sand dunes were not disturbed.

The Cable Landing Station has been under construction since June last year in preparation for the cable’s arrival.

The 15,000km cable will travel from Oregon, USA to Sydney, Australia with landings in American Samoa and Hawaii, as well as Mangawhai Heads. It will bring much improved internet speed and significantly increase NZ’s international telecommunications capacity when it’s turned on in June 2018.

“On behalf of the entire Hawaiki team, we thank everyone for their understanding and consideration while this once-in-a-25-year event takes place,” said Mr Howarth.

n For updates on the cable landing and beach closure dates, please go to mangawhaifocus.co.nz/hawaiki. Or if people want to learn more about the project, Hawaiki are proud sponsors of the Mangawhai Museum special communications exhibition. The exhibition opened in late June 2017 and tells the story of communications in the region from early settler days to submarine cables and the Hawaiki project in particular.

The Hawaiki cable is landing at Mangawhai Heads, about 800m north of the Surf Club. This diagram shows there will be restricted access at that time.

What does it mean for Northland and NZ?

What about the environment?